We value a culture of giving and encourage our employees to Do Some Good. Throughout the course of our Corporate campaign, we’ll be spotlighting several of the incredible agencies that United Way serves in our local community. Times may be difficult, but we have witnessed communities rising to meet hard moments. If in a position to give this year, we encourage you to support your local agency, too.

Children’s Center of SWMO exists to provide a safe haven for children undergoing investigation of and treatment for abuse.

With a child-friendly setting and specially-trained staff, the Center helps children feel as comfortable as possible, even while undergoing forensic interviews, medical examinations, or trauma counseling sessions. The hallways are filled with brightly colored superhero art. They also feature real superheroes –displaying the handprints of local children who have completed the Center’s therapy programs. 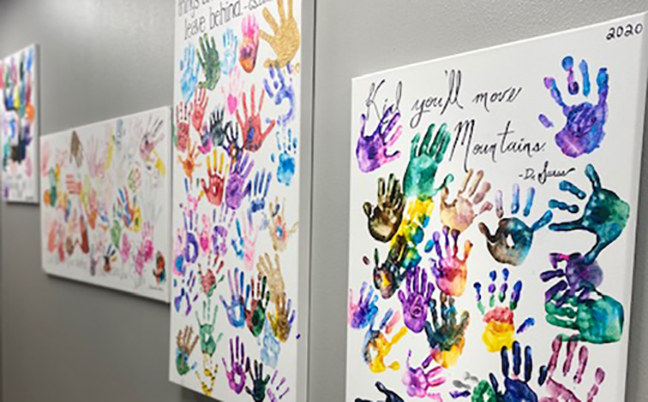 Every handprint represents a child’s story and gives voice to hurt, hope, and healing.  Here is the story of one:

A preschool teacher made a hotline call after noticing bruising on a young student. The 5-year-old victim had been enduring physical and emotional abuse from his mother’s boyfriend. While he hadn’t told a safe adult about his abuse, it was materializing in anger and aggressive behavior. The boy was brought to the Children’s Center and during his interview, he disclosed details of the abuse. The child also received a medical examination that determined physical evidence to confirm the allegations. The recorded interview and medical examination proved vital in the investigation and prosecution of his perpetrator.

The young boy was immediately recommended for Trauma Focused-Cognitive Behavioral Therapy (TF-CBT) to help him heal. During the first session, his (non-offending) grandmother reported he was suffering from severe nightmares, irrational fear, uncontrolled anger, and was struggling to control his emotions. He had a lack of attachment that made him feel unsafe and fear abandonment.

The clinical child therapist began by teaching him to do deep belly breaths, a relaxation coping skill called balloon breathing. Then, they began a session of play therapy which allows children to express their feelings in creative ways.

At first, the boy chose a lamb to portray himself and asked the counselor to choose a “bad guy.” She chose an alligator and the boy self-directed the puppet show, which featured a very relatable plot. The lamb was brave, safe, kind, and encouraged others to be nice. He was attacked by the alligator, but then he was able to convince him to stop. In the end, he built a safe place to protect all the animals and himself by building a fence around them. His play naturally created boundaries and safety. 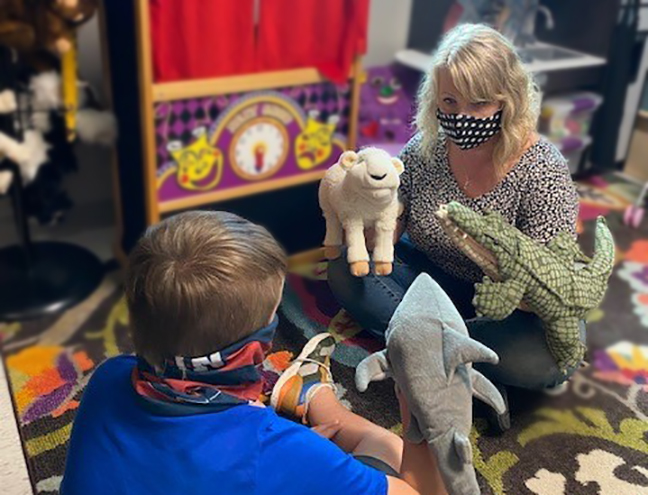 After seven months of these weekly sessions, the boy’s symptoms subsided to a normal range. When asked how he felt, his response was: “Happy, calm, loved, and surprised.” He also knew he was safe at his grandparents’ house, his school, church, and at The Children’s Center.

This little one’s story didn’t end with the disclosure of abuse, it continued until he processed through his trauma. The Children’s Center helped him find his voice and new hope.

During his last session, the boy directed one last puppet show. He picked two dogs to play the good guys. A wolf and a T-Rex were chosen as bad guys. Just as many times before, the brave lamb saved the day.

By Life@Leggett Do Some Good