We value a culture of giving and encourage our employees to Do Some Good. One way is through our annual United Way campaign, which has challenged our employees to raise $125,000 this year! Over the course of the campaign, we have featured several incredible United Way funded agencies. Learn more about their stories and the effective work they do to help those who need it most in our communities.

The Carthage Crisis Center is a faith-based shelter committed to helping homeless individuals in the Carthage, MO, area. Their services provide compassionate support to those entering their doors, including employment assistance, clothing, food, and a warm bed to sleep in at night. Each day, their facility provides housing for up to 20 males, 20 females, and 4 families. The location operates as a recycling center and uses profits from that service to maintain their facility. They also developed a food network of 70 organizations, which distributes about 500,000 pounds of food annually.

Their work has touched the lives of many individuals in our community — often giving families the support they need to put their lives in order. Here is just one example.Alanea was only 13 when she began using drugs. Several years later, she fell in love with Josh. Neither of them were able to overcome their addictions, and they spent well over a decade abusing drugs as a couple.

In 2012, Alanea and Josh were overjoyed to learn that they were pregnant. They desperately tried to get clean together and attempted to make better choices for their future. Josh got a job, Alanea was having regular doctor appointments, and they found out they were having twin boys.

Unfortunately, they didn’t realize how desperate their situation would soon become. With only a few months clean, Josh had an accident at work and was prescribed narcotics for pain. He quickly relapsed into a downward cycle of drug abuse. 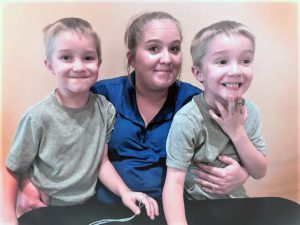 The twin boys were born healthy in March of 2013. Despite a strong desire to be good parents, Alanea and Josh still spent most of their free time high. For years, they were unemployed, living in government housing, and barely surviving on food stamps.

By 2017, things came crashing down. Josh was arrested for warrants and sentenced to a year in jail. Left with no support, Alanea and the boys found themselves homeless.

Things quickly improved when Alanea received approval for placement at the Carthage Crisis Center. She and the boys received housing, structure, and warm meals. They all loved the family style dinners and began to feel the peace of home. The Crisis Center strictly enforced their rules, which required Alanea to stay clean. The stability she had found there became a strong motivator and she was finally able to maintain her sobriety. Alanea shared, “I knew if I was ever going to have a chance to get it right, this was it.”

The staff at Carthage Crisis Center taught Alanea how to live a healthier life and connected her family to more local resources. By the spring of 2018, with the Crisis Center address serving as her own, she was able to enroll the boys in Parents as Teachers. The kids began kindergarten and Alanea found a job which provided her with even more self-confidence.

Early this year, Josh was released from jail. He joined his family and they were able to secure a home. Carthage Crisis Center continued to encourage and support them through the entire transition. They helped the family set up their home, fill their cabinets, and continued to hold them accountable for making consistently good choices. 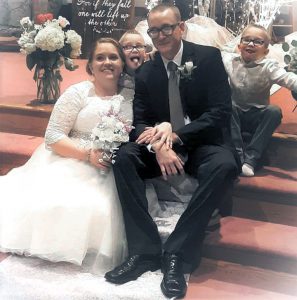 Josh and Alanea were married this year and the ceremony was officiated by Jim, Executive Director of the Carthage Crisis Center. The couple is extremely proud of the changes they have made in their lives. Josh is currently employed at CFI and American Construction. Alanea works for a local school district. They no longer receive government support, can pay their monthly bills, and regularly contribute money into savings.

According to Alanea, their life is “good; crazy good.” They are both two years clean and forever changed.

For more information about the services available, or to volunteer at The Carthage Crisis Center, visit carthagecrisiscenter.org/

By Life@Leggett Do Some Good