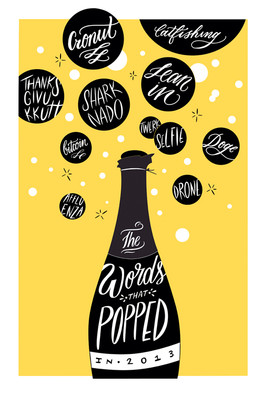 Introductory note: This is yet another “Best of 2013” article. But as we are well into February, it will be the last one I link. Sorry, I guess I’m sentimental – 2013 still holds so many great memories. Actually no, I just like articles on year-end lists. Except ones that litter nearly every Internet news page – things like “2013’s Top Photos of Celebrities Without Makeup.” There aren’t many nutrients in those stories, I can tell you from experience, and in terms of brain cells killed, each click equals the strength of a 12-ounce beer, single shot of liquor, or glass of wine.

Did you take a selfie of yourself twerking on Thanksgivukkah? – Wall Street Journal

Anyway, onto the article. It’s an interesting time to follow words, isn’t it? They storm onto the scene with fierce momentum, seem cool for about 90 seconds, and then are overused by your workmates for the next six months. This Wall Street Journal article details some of the top words in 2013, including “selfie,” which ultimately won Oxford Dictionaries’ Word of the Year honor. But did you know that “selfie” originated in Australia – more than 10 years ago? And “twerking” arose from New Orleans two decades ago? But “Thanksgivukkah,” and a bunch of other less-popular creations like “Turkukkah,” resulted from the extremely rare concurrence of Thanksgiving and the first night of Hanukkah. We can give thanks that “Thanksgivukkah,” which unlike “selfie” and “twerking” graciously stopped torturing us a few months ago, won’t be heard from again – or at least 70,000 years according to some calculations. They will definitely run out of Internet by then.

English, the promiscuous language – The Economist

More about words. If you don’t like ‘em, stop reading now because this gets intense. English, according to this article from The Economist, is “a global language for hundreds of years now, and a mongrel for a thousand.” But what if the English language hadn’t borrowed, expanded, and replenished itself the way it has? What would we call “shampoo” (Hindi)? Or “sky” (Old Norse)? Or “piano” (Italian)? Or thousands of other words that were added along the way? A poet named William Barnes wanted it that way, and didn’t like the fact that many Old English (or Anglo-Saxon) words like “inwit,” “earthtillage,” and “bodeword” were replaced by “conscience,” “agriculture,” and “commandment.” Barnes even created a few words to help with things that Old English hadn’t covered yet. This article briefly explores how things would have worked out if English hadn’t borrowed words from other cultures, and instead remained as over-literal as, say, German – where a vacuum cleaner is a “Staubsauger” (literally, “dust-sucker”) and placenta is “Mutterkuchen” (“mother-cake”).